What Is APR (Annual Percentage Rate)? 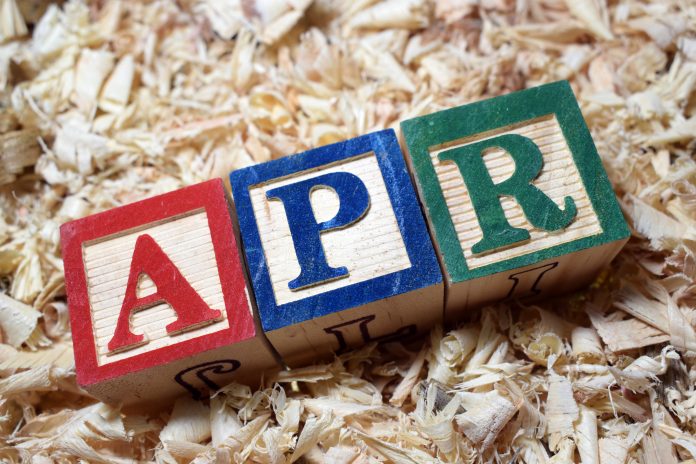 An annual percentage rate is the amount of simple interest that is created from money that is borrowed by a consumer. The term comes from calculating the price of a loan over the course of a specific time frame that is usually a year. Another way that interest or APR is earned is via investments such as stocks or private lending.

How Does an APR Work?

An APR or annual percentage rate, works by taking into account the principal amount on a loan based product which is funded by an institution. This amount is divided into monthly installments that provide a net payment amount which is then attached to your yearly interest.

Because interest rates are a byproduct of credit based items such as credit cards, mortgages, or motor vehicle loans, they must remain compliant with federal standards such as the Truth in Lending Act and the Consumer Protection Act. These regulations protect consumers who may potentially enter into financial contracts that aren’t completely understood by requiring full disclosures of their lending products.

How to Calculate an APR

The basic calculation method for an annual percentage rate or APR is to use the measurement known as a periodic rate of periodic interest rate. This formula takes into consideration the number of time periods regularly occurring in any particular calendar year and then multiplies that number by the annual interest rate. A known interest rate will then be added to any known fees, which are divided by the principal (loan amount). The loan amount is subsequently divided by the loan term (days) and multiplied by one year to convert to a percentage (based on 100).

An example would be if you applied for a $5,000 personal loan with 5% interest to be paid over two years, including a $300 origination fee. This calculated annual percentage rate would require a monthly payment amount based on the following factors:

Therefore the annual cost of the borrower’s loan equates to 8% per year interest rate on the total loan amount over the full course of the loan term.

There are several different types of annual percentage rates based on various credit categories that you are seeking to be approved for. Some loans or financial products will automatically come with a higher APR, while others will remain extremely competitive.

Below are some of the most common interest rates for typical consumers:

An APY, on the other hand, will correctly display the amount accrued as a result of compound interest, that will multiply or aggregate on a more frequent schedule such as on a daily basis. In some cases, this can either increase the actual rate or effectively double it over the loan term. Federal financial protections were instituted to highlight the disparities between the two numbers, as they can cause an array of confusion when configuring the direct financial liability.

A basic or nominal interest rate is solely based on the amount of money charged for lending while foregoing any additional fees or inflation adjustments that may be rolled into a loan. As it is commonly lower than other types of rates, borrowers may assume that it is likely the only residual charge aside from the principal balance. Annual percentage rates (APRs) are required to be composed of factors such as simple interest, loan fees, and other seemingly hidden charges. As a result many lenders may focus on the monthly APR rather than market a product that highlights the yearly amount.

Disadvantages of an APR

Borrowing costs may far exceed advertised or assumed rates, such as annual percentage rates or interest rates. This can come as a disadvantage to those who are unaware of the actual cost associated with loans with fluctuating paydown periods or longer loan terms. Assessing the loan’s true cost based on a variety of payment scenarios or contract terms may eliminate the hurdle of understated or improperly estimated information.

What Affects Your APR?

An APR is affected by several different factors such as the price rate index, down payment amounts, treasury rates, or credit scoring. Additionally, unforeseen lending charges that range from lending fees, closing costs, basis points, or penalty fees can all be components of the exact amount you will be charged upon accepting the conditions of a loan.

What is a Good Annual Percentage Rate?

A good annual percentage rate is one that doesn’t fluctuate wildly over time and accounts for all of a financial product’s fees upfront. Fixed rates are typically more reliable in the long run due to their inability to be changed over the loan’s lifetime. Although many APRs are advertised to be competitive in some cases, it may not be the most ideal for your financial situation. Having a higher credit score or loftier down payment can assist you in being offered a lower rate overall, versus an introductory rate that increases after the first year or two.

Annual percentage rates account for the perceived benefits of entering into a loan contract or other credit agreement. Having a detailed accounting of what actual charges will be incurred over the course of the arrangement will provide a true picture of the value over the long term. Conducting the proper amount of research beforehand can save you from misleading costs, an unsatisfactory experience, and thousands of dollars.

What Is an Installment Loan

What Is an Unsecured Loan

What Is a Bridge Loan

What Is an Amortization

What Is a Home Equity Loan

What Is Debt-To-Income Ratio?

How to Read a Credit Report

What is a Credit Card Balance?

What Is Mortgage Insurance